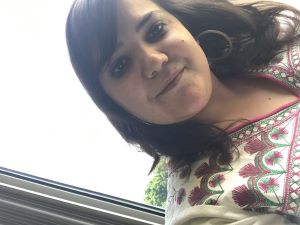 Josefa Ortega holds a Masters’ Degree in Art History, a B.A. in Social Communication, with a Specialization in Teaching History of Mexico. She has collaborated with Casa Gallina since 2012, where she was a curator (2012 to 2017) and general coordinator (2018); she has served as director since January 2019.

Both in her practice in Casa Gallina as well as in other projects, she has shown an interest in conceiving art as factor of social transformation, in curatorial exercises such as Urban Deliriums (El cuarto de las máquinas, 2017); Tlaxotlali. Alternating Cycles, Harmful Feasts and The Vertigo of Abundance (Casa del Lago, 2017, 2014, and 2013); Alleged Guilty and Broken Animal (Modern Art Museum, 2009); among others.

She has also curated exhibitions of individual artists, including Perla Krauze. Lithic Matter. Memory/Processes/Accumulations (Museo Amparo, 2017). Between 2016 and 2018, she served as a curatorial consultant for the postgraduate course in Curatorial Studies of the Institute for Aesthetic Research at the UNAM.

Since 2012, she has been part of the Seminar Workshop on Restoration of Modern and Contemporary Art in the ENCRyM, teaching in the area of History.