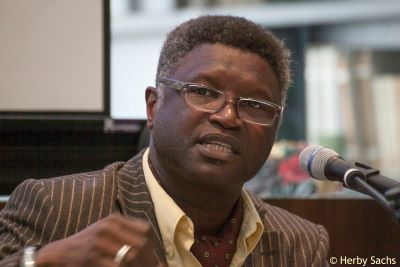 Mansour Ciss is a multinational artist. Born in Senegal, Dakar. Lives and works in Berlin, Germany.

Mansour Ciss studied from 1973 to 1977 at the National Institute of Arts of Senegal. In Dakar, he sculpted wood, large sculptures with cubist forms, some of which were part of President Senghor's collection.

Since 1993, he lives in Berlin. It is in the German capital that his work takes a more committed and political turn. It was in this city that the Berlin Conference was held, during which the colonial powers shared Africa in 1884-1885. In 2000, Mansour Ciss created the Deberlinization Laboratory with Baruch Gottlieb and later with Christian Hanussek. It is a laboratory of ideas, a sort of artistic platform for rethinking colonial history and the African continent.

Concretely, Mansour Ciss Kanakassy has chosen an original medium to draw the Africa of tomorrow: he has created a currency - the afro - the single African currency. An imaginary currency, symbol of the unification of African countries.

Mansour Ciss joins us for the onAIRISM - interaction and connectivity workshop in June and the conference in November 2022.